Today on the 4th of January 2015, we are 27 days into the Ukrainian government’s latest initiative of the “silent mode” – the latest additional appeasement measure after the “Minsk agreement” from September last year. Still, there is no visible let up in Russian attacks on the front line all across occupied Donbas, reaching from southern Mariupol until Stanitsia Luhanska on the north eastern end of the new de facto border between Russia and Ukraine. The number of daily Russian attacks on Ukrainian held towns and military positions slightly decreased from approximately 40-50 a day to now 20-30, however this is rather due to the fact that Russian forces now decide when and where to hit, being able to concentrate their forces on the target areas, not being afraid anymore of Ukrainian counterattacks or even return fire after their assaults. Just during the first 4 days of 2015, Ukraine saw 2 civilians and 1 soldier killed in fighting, while at least 7 civilians and 12 more Ukrainian troops were injured. Hot spots of the fighting remain the same as before December 9, meaning the Bakhmutka highway in northern Luhansk province with its Ukrainian strongholds Krymske, Zolote and Hirske being targeted daily, the town of Stanitsia Luhanska on the (old) Ukrainian-Russian border and Popasna, opposite Pervomaisk. Yes, the number of Grad missile attacks decreased, but more direct artillery, mortar and small arms encounters remain a daily appearance with civilians as well as Ukrainian armed forces casualties. In Donetsk region, the airport of Donetsk city as well as its bridgeheads in Pisky, Opytne and partly Avdeevka are subject to daily shelling and fire attacks, while it remains unclear, if Terminal 1 of Donetsk airport is still accessible via Ukrainian.held territory or the two allowed resupply routes via Russian-held territory signal an even worse situation. It is chilling that Ukrainian troops at the airport – the so called “Cyborgs” – claim, they were not rotated and resupplied with arms and ammunition since more than 8 weeks.

Picture shows flags of “Novorossiya” on top of Terminal 2, only meters away from Terminal 1, held by the Ukrainian army

A rather new development in terms of Russian attack focus areas stretches along the Kalmius river, north of Mariupol. This river is the official demarcation line, agreed on by all parties in the Minsk memorandum. However, as we know Russian forces and their local proxies do not accept their own signatures under the paper, it is not astonishing they are willing to extend their area of control beyond that natural border. Thus, attacks started on January 1st with all sorts of weapons, even face to face encounters, trying to push back Ukrainian forces – mainly from the Regiment Azov national guard – and build bridgeheads on the left side of the river. Between January 2 and 4, Orlivske, Hnutove and Hranitne came under attack from Russian forces.

Beyond concrete attacks on the Ukrainian line of defense, multiple other worrying developments were recorded, mainly a – partly violent – replacement of Russian “volunteer” (former army) mercenaries with more Moscow-loyal forces, accepting the high command from the Kremlin and behaving less “wild” on Ukrainian ground. Despite only little facts available, it seems those Russian invaders, trying to build a “New Russia” – “Novorossiya” – are fought and replaced by the more “legitimate” pro-Moscow regimes, namely the “People’s Republics of Donetsk and Luhansk”. While one Russian ringleader, called “Batman”, was killed by LC regime forces, others of his group swore to fight both, the local regimes as well as the Ukrainian army from now on. Ukrainian reports say up to 23 militants from both sides were killed in recent infighting, seemingly supported by aftermath pictures.

While those, not behaving like Moscow wants it, are sent back to Russia or – if not willing to – obliterated without mercy, those, who obey to the Kremlin leaders’ will are rewarded with the latest Russian army military hardware, namely the BPM-97 “Vystrel”. Those apc, only produced in Russia and only used by Russian border troops, are the latest hint that the very leadership of the Russian Federation has nothing in mind that could equal any kind of retraction from its offensive position in Ukraine. 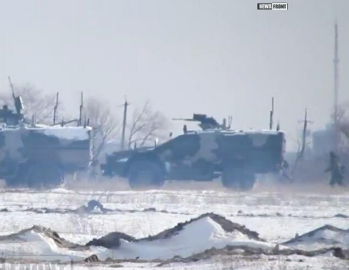 The BPM-97 in “war games” in Luhansk province

At the same time, it becomes once more explicit that Russia – just like with its T-72B1 or T-72B3 – would never give its latest armored personal carriers to any “rebel” faction in some renegade region abroad, but would only allow a free “export” of its 2000s hardware with qualified and loyal – Russian Army – personal. That this personal is active as never before in Ukraine can on the one hand be recognized by multiple reports:  Even the Ukrainian NSDC, which has a long history of downplaying Russian involvement in the conflict, fearing a cut off from international funds, said on January 3 that hundreds of Russian Federation troops entered Ukraine lately. Other reports from local witnesses and media reported for instance that 300 Russian soldiers had taken over Horlivka at the frontline with Ukraine, sending “DNR” forces to the hinterland. On the other hand, more and more evidence turns up that Russian soldiers from the Far East, seen approaching from Ulan Ude and elsewhere in November, are now fighting in Donbas, like in Horlivka as mentioned above.

Last but not least, the Russian army (ab)used the Ukrainian “silence mode” to build up a working military logistic and infrastructure network in Donbas, now being able to (at least for a while) repulse any kind of military attack from the Ukrainian mainland. Part of this network are air defense systems and backup bases in Donbas hinterland (10km or more from the front line), like this base with dozens of BMP-1 in a former public transport depot, recently recovered and geolocated by me in Krasnyi-Luch.

Russian base in Krasnyi Luch

In conclusion, there is no indication at all of Russia or its two local puppet regimes, having any intention to stick to the signed Minsk agreement. Hence, there is no sign on the horizon that the Ukrainian president’s peace plan, ceasefire or “silent mode” were anything close to be working in Ukraine’s favor. Therefor it is up to the Ukrainian government to chose if it wants to further stand idle and watch how a powerful Russian invasion force is taking shape on Ukrainian soil, able to hit hard when it where it chooses — OR if it wants to regain the initiative in the conflict by not allowing militants to strike at will and unpunished, killing Ukrainian citizens and soldiers and – slowly but steadily – expanding their controlled territory inside Ukraine and further shrinking a young, but proud and – if willing – also punchy European nation. Did you have a good read?! Please support my work with 1$ per month or more!