Many analysts an – much worse – seemingly also the Ukrainian government were surprised by the recent surge in violence in eastern Ukraine while most western media branches have not even noticed that Russia took its war against Ukraine to a new level with an unprecedented “increase in number and intensity of attacks” (the Ukr army).

Several number confirm that observation. While the first shaky weeks of the Minsk “ceasefire” in September saw between 30 and 40 attacks per day, that number reduced to around 10 (/day) in November and December last year. First analysts thought president Poroshenko’s appeasement policy towards Russia bore fruit, but during the first week of January, the Ukrainian army recorded once again around 40 attacks per day. This number increased more and more, reaching 50 and stands at more than 60 per day right now.

Another indication of the recent surge in anti-Ukrainian military violence is the number of Ukrainian army casualties. On December 9 2014, Petro Poroshenko proudly announced that the last 24 hours had seen not a single Ukrainian army casualty, seemingly supporting his “We stop shooting, they will follow” policy. But things turned out to be developing in the utter opposite direction. A new Russian offensive, starting on New Year’s day 14/15 brought more than a hundred Ukrainian military casualties, with the 48 hours from January 8 to 10 resulting in 34 dead in injured only to have just one example.

During the last days, the number of attacks became simply too high to count and the incidents are impossible to distinguish from each other, though, I tried as this “one-evening-MLRS-target-map” from the northern Luhansk front shows.

Russian MLRS and artillery attacks on the eve of January 11

Instead the entire Ukrainian front in the Luhansk and Donetsk regions is under intense attack of all kinds of weapons, mainly heavy ones like tank, heavy artillery, Grad missiles and even BM-27 Uragan, which are might MLRS with a highly destructive potential. In one word, what we see since the last 2 weeks is not just an “extreme deterioration of the situation”, but war, simple as that.

But was this development really so unforeseeable?

At least two facts, one clearly visible, one invisible until very recently, show that this is nothing of the sort of a “sudden rise in violence” or an “unexpected flare in attacks” like many experts want to make us believe. Instead, I argue, this whole process goes exactly according to a precisely scheduled plan by the warmongers in the Kremlin, which are not at their target situation in Ukraine yet.

Everybody could see the influx of tens of thousands of Russian “volunteers” (paid mercenaries) and army personal. This did not happen during the last 2 or 4 weeks or under any serious cover, but at since late October and in brought daylight.

In late October, the first some hundred “little green men” showed up in Donetsk city, widely reflected by the online community and the Russian mainstream media.

At November 1 for example, hundreds of – obvious – Russian troops with modern equipment showed up in Luhansk, parading through the city and openly declaring it under their control from then on (picture). These troops were strenghtened and spread throughout other cities, for example Krasnyi Luch where they showed up on December 12 with an even larger military parade.

Shortly after on November 10, more heavy Russian army armor – T-72B1 – showed up on the streets of Donetsk, at a time, the Minsk agreement demanded “pro-Russian forces” to withdraw exactly these weapons from the buffer zone. 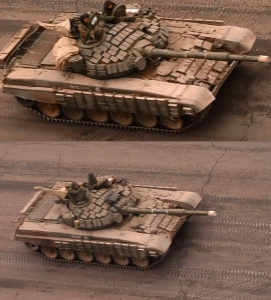 There are many more examples, also from as early as September when a 100+ Russian army KamAZ and heavy artillery convoy reached Donetsk city over several days. One more example is to be called as it seemed so unreal at this point that most analysts just went over it. In late November, an entire (Russian) army under the flag of “Novorossiya” and marked with Soviet CCCP signs waited at Ukraine’s eastern border – inside Russia!! – ready to invade. It obviously did shortly after. 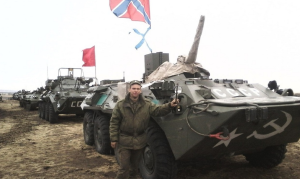 In conclusion, no one could say in early December that Russia had not literally shouted, “We prepare for war inside Ukraine!” while some optimists – like me – still had another theory, seeing the invasion of thousands of Russian troops bright-eyed. But this hope – that Russia sent regular soldiers to calm down the situation and stop “rogue” militias from attacking Ukrainian soil  – was dead wrong. It sent them to control each and every anti-Ukrainian fighter, match them to one force under one command and be more fit for the decisive battle which would start 2 months later.

Analyzing the military hardware inside the Russian invasion base in Russia’s Rostov region, there was one thing that puzzled me for several days. Between the different battle groups were a number of white spots, which I found hard to identify for quite some time (picture below, exact position on a map). 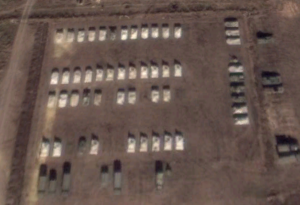 First, I thought those were tents as they have the same color as them of them inside the base, but a second look confirmed, those are army vehicles. After several discussions with other analysts, we still had no real clue. Neither the idea that those were the “aid convoy” trucks nor “MC – Russian peacekeeping” vehicles was quite convincing. The aid trucks enter Ukraine officially and don’t have to “hide” at such – formerly semi-secret – base and Russia – after some public mulling – decided to not play the MC (“peacekeeping”) card in Ukraine. Then finally, the bitter truth filtered through.

After @DajeyPetros spot and my analysis of the Russian invasion base, I read an article by the AAAS, confirming the base was established around March 2014 – a date, I could not confirm as I just knew, it was developed after October 2013. At this time – 5 months before the Russian army invasion in Eastern Ukraine in late August – thousands of troops and hundreds of weapon systems were prepared to be deployed inside the neighboring country – all according to a much larger plan and while the world looked at Crimea.

So for what could these white vehicles – 90% sure BMP and BTR  – be positioned there in October (the date of the satellite image) or even earlier?! … WINTER WAR!

And guess, what showed up shortly after – far too earlier, because long before prepared and not prepared for a late-starting winter – in Luhansk and Donetsk regions?! Correct. White-colored BTR and BMP. Moscow planned its escalating – or at least at no point cutting back – winter offensive inside Ukraine far in advance, probably just after the August offensive, in any case well before October 2014

What does all this tell us? What we see is sufficient evidence that Russia never had the plan to halt aggressive operations in eastern Ukraine – especially not this winter, which will probably hold for the next 2 months in Donbas. Its offensive capacities in manpower and equipment were very openly built up during the last 3 months all across the occupied territory and the base satellite images reveal that it planned what it did in March for August and in October for January – now. What we see in eastern Ukraine is nothing like “sudden” or “unexpected” developments, but an escalation of warfare and offensive operations within the plot of a master plan. It is going all according to Kremlin’s plan, developed long ago and – at least 50% – announced to Ukraine and the world since October 2014 at latest. Saying, we are “surprised” now shows either very limited foresight or dishonestly to itself and its people.