“The situation is under control” –  this phrase was used by the Ukrainian government/army:

in September when the attack began and Russian forces took all hangar buildings,

in October, when they seized Terminal 2 for several times,

in November, when Russian shelling and destruction mounted,

in December, when Terminal 2 were handed over to the invasion army peacefully and Russians took up perfect offensive positions beside Terminal 1,

on January 5 when Ukrainian intelligence services announced fresh  Russian army formations arrived to surround and take the airport as the top priority,

on January 12, when new Russian ground forces showed up in Terminal 2, announcing to do exactly that,

on January 13, when the badly damaged tower collapsed under intense artillery and tank fire in the morning and Ukrainian troops stopped a first Chechen infantry push in the basement of the last Ukrainian-held terminal in the evening

AND on January 15 – today – when Russian invasion forces finally stormed the terminal and are fighting Ukrainian troops inside it since 7 hours now.

The situation is NOT under control. It is out of control since the Minsk agreement, which has NEVER been a mutual ceasefire as agreed on, but always an unilateral truce, only adhered to by the Ukrainian side. Nobody should be surprised now. Russian invasion forces didn’t attack Terminal 1 by surprise, they advance since 5 months. Every month. Steadily and without major setbacks. This development was observed and well-documented by dozens of analysts and – of course – also by the Ukrainian army, which lost its freedom of movement / building after building / man after man in the area of the airport since September last year. However for a reason that can only be called deliberate blind appeasement policy, the Ukrainian leadership decided to let Russian forces advance over a period of about 130 days, pretending “the situation is under control”, which now should be clear to everyone, it is not.

At the same time, president Poroshenko connected the defense of the airport inseparable with the defense of entire Ukraine, saying December 5 that the defense of Donetsk airport actually is the defense of Kiev and Lviv. Losing the airport means losing Ukraine. Knowing this, it is even less understandable why he accepted the Russian advance for the last 5 months, without implementing any forceful countermeasure.

So his afternoon, the inevitable happened. Under intense tank fire from Spartak and Vesele plus artillery and mortar support from all across Donetsk city and Makeevka, Russian infantry forces stormed the ground floor of Terminal 1, coming from nearby Terminal 2. Remember that this 50 meters away building was transferred from Ukrainian to Russian troops peacafully in early December as it was allegedly “destroyed and not usable as a strategic position” anymore. Another misjudgment, obviously. 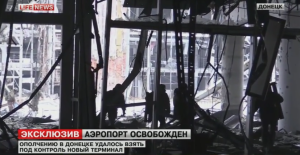 Russian troops, walking from the old into the new terminal without resistance.

While the actual attack was not caught on camera, Russian TV published first images shortly after, showing its forces controlled practically the entire second floor of Terminal 1, offering views into all four cardinal directions. Parts of the apron, the car park, the destroyed tower and Terminal 2 are clearly visible in the footage as can be seen below. At the same time, Ukrainian forces in or near the airport reported they also fought invasion units of “battalion size” (so more than 300 soldiers) that entered the basement and the 3rd floor. Indeed Russian TV footage showed them changing levels inside the terminal, looking all across the large entrance hall of the terminal and firing up and down stairs within the building. Last but not least to enter the 2nd floor as the Ukrainian government confirmed, they must have passed the ground floor and 1st floor at some point. So in conclusion it is fair to say, battles between Ukrainian forces and Russian invaders took place all across Terminal 1 at the afternoon of January 15.

Views to all sides

But Russian troops were not just inside the Terminal. The nearest possible Ukrainian defense position is located at the ruins of the tower buildings, some 870 meters to the west. Russian tanks and ground troops moved all along south of Terminal 1, passing it and coming in a position to fire at the remains of the tower from that range. This way, they could cut Ukrainian reinforcements from Pisky and the tower – at least for a while. 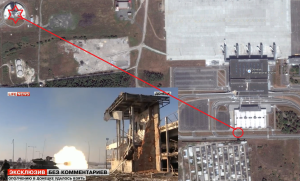 At 21:00 that day, one of the defenders announced via Facebook that over the afternoon and evening they were able to “take up positions in all floors” again with the help of arriving reinforcements. Moreover artillery ran off the attacking tanks and they could evacuate their dead and wounded (at least 2 KIA, 7 WIA). However the message included the famous phrase that should cause everybody to be terrified of the next days: “The situation is under control.”*

* respectively: “The situation is more or less stabilized.”