This morning, February 9 2015 at 9:25, Russian forces in eastern Ukraine claimed what was looming and inevitable seeing no change in tactics and steadily rising Russian ground forces since the beginning of January, but latest since the fall of Vuhlehirsk on February 4 – the pocket of Debaltseve closed and thousands of Ukrainian soldiers got trapped between the Russian puppet regime republics of Donetsk and Luhansk.

What was the initial situation?

During the last two weeks, Russian forces made steady territorial gains around Debaltseve, capturing for example Nikishyne, Ridkodub, Mius and the 8000 inhabitants town of Vuhlehirsk as well as overrunning the Ukrainian front in Chornukhyne only 6 km from Debaltseve itself. However, the Ukrainian central military command kept lying to itself, its soldiers and its citizens, claiming on its daily updated maps that nothing really changed and losses were not strategically important, demanding no change in policy (total offensive or withdrawal of up to 5000 troops, facing the danger of getting encircled). The below map shows the situation as described by the Ukrainian military command (left) and Russian invasion media (right). Despite the certain fact that the Russian map includes an element of exaggeration, it is much closer to reality, showing the almost-encirclement of all Ukrainian forces in Debaltseve and south of it. Meanwhile the Ukrainian map did not even “dare” to remove the Ukrainian flag from Vuhlehirsk, simply not talking about it anymore since the loss 6-7 days ago.

Then yesterday evening it was reported that Russian forces had pushed northward from Vuhlehirsk, taking Kaliynivka. I assessed the development in my latest article, predicting that if there was no immediate counteroffensive, Kalynivka would be the springboard to the E40 – the only lifeline to Debaltseve – just 3.5 kilometers away from it. It turned out, exactly this should happen within the next 24 hours. The map below shows the situation as it looked according to my analysis yesterday.

Early morning today, strong Russian army forces departed from their strongholds in Horlivka and Yenakijeve (or came directly from the direction of the Russian-Ukrainian border), made a last stop in Vuhlehirsk and drove northward, passing yesterday-taken (and unchallenged) Kalynivka and head-on attacked the tiny village of Lohvynove which is the only settlement along the E40 between Luhanske and Debaltseve and possibly one of the weakest points of defense among the Ukrainian defense positions. It is possible that Russian forces also attacked from Nyzhnje Lozove to the north, but rather unlikely. There is an Ukrainian defense position (different from the south) and no footage available of fighting at that location, before reaching Lohvynove. Also,(unconfirmed) footage shows strong Russian army formations, passing rather urban areas “to the checkpoint” and thus probably coming from the nearby towns to the south and south west.

2S1 self-propelled artillery pieces “on their way to the checkpoint”

Long before first pictures of the actual attack on Lohvynove were published by Russian state media and pro-Russian media groups in occupied Donbas in the late afternoon hours of February 9, I posted the first tactical map of how the situation might have developed according to reports in the morning hours and around noon, made by two Ukrainian journalists and two army sources on the ground.

It should be mentioned again that while the Russian side claimed the closure of the pocket since noon, Ukrainian army sources vehemently denied such development, also calling on journalists to not publish reports, based on Russian invasion sources. This – extremely weak – tactic was already used, when Ilovaisk, Donetsk airport or Vuhlehirsk were lost to Russian forces and the Ukrainian army tried to gain the information monopoly of the situation, publishing the related new when it would have wanted to …

Then in the evening of February 9, the same disgusting procedure as always started with Russian state media airing (graphic!) footage of overrun Ukrainian positions, bloody Ukrainian POW and yelling Russian ground forces. What is important about the footage however is that it – geolocated – proves that Russian forces indeed too Lohvynove and were – at least for some hours – in full control of it. Especially footage of the bus station along the E40 proved that they cut the “lifeline” of several thousand Ukrainian troops east and south east of it. 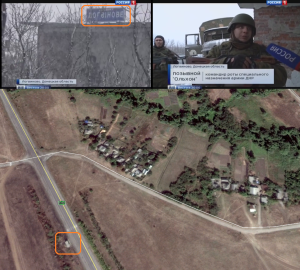 More (graphic!) footage from another pro-Russian channel showed that the (filmed) forces indeed approached the village from the south, further continuing to the inhabited part of it on the north-eastern side of the E40. It also shows that the Ukrainian army claim of a “tank and apc” force is rather not accurate as dozens of marching ground troops can be seen in the footage, while only one Russian MT-LB is seen nearby.

Over the whole afternoon and evening, the Ukrainian army claimed that it was “in full control of the entire E40/M04 between Artemivsk and Debaltseve”. This seems increasingly unlikely, especially as Ukrainian media in the evening hours quoted soldiers on the ground, reporting the pocket was closed and not only that; Russian forces had also entered Myronivka some 13 km north of the described battlefield, threatening a double layer around the Ukrainian troops in the bridgehead around Debaltseve and holding back possible reinforcements at the same time. Myronivka is located at the entrance of the Ukrainian promontory into Russian-held territory. A real cut of the E40 there would even trap 1-2 thousand Ukrainian troops more as it would also cut Svitlodars’k and Luhanske from the Ukrainian mainland. The below map, based on the pro-Russian version, shows where the two (reported) E40 cut-off locations are located and illustrates the looming disaster.

Latest reports from an Ukrainian investigative journalist in the area confirmed fighting around Lohvynove into the late evening with Russian forces holding the village (blocking the E40) and Ukrainian army units trying to recapture it. The report also included another battle in the village Novohryhorivka, which was fiercely attacked over the whole day and on the verge of falling to Russian troops in the evening. If one or both villages remains under Russian control over the next hours, the journalist rightly concludes, the pocket would be closed.

With the next Minsk talks (a pure farce against the backdrop of the Kremlin obvious and deadly aspirations to capture wide parts of Ukraine with 10.000s of troops and all brutality and willingness to sacrifice thousands of Russian citizens for that aim) coming on Wednesday, the Russian aim is to raise the stakes. Whether or not thousands of encircled Ukrainian troops will be part of the bargain at these negotiations, the Russian aim is to get full control over Debaltseve, being able to move on westward with thousands of own troops, now bound in and around the city.

Looking at hasty ongoing Ukrainian efforts at this very moment, it seems not impossible that it will be able to breach the de facto pocket, which holds since 15 hours, in the coming hours. However if it does so, using all its reserves in the area, it will only be a question of hours or days, before even stronger Russian army reinforcements will push back the Ukrainian army forces and re-close the pocket. Observed Russian army Msta-S columns, a few kilometers to the north in Alchevsk, show what Putin is ready to invest to reach that goal. The battle around Debaltseve is decided, the pocket is closed right now, between 2000 and 5000 troops are besieged and the outlook is gloomy.

Without an immediate and full mobilization, martial law, outside military assistance and intense international diplomatic and economic sanctions to bring Russia back to its senses, Debaltseve will fall within days and the entire Ukrainian frontline will collapse in a couple of weeks or months at max. Russia’s and its proxies’ aim is clear and openly admitted: The seizure of the entire Donbas. Once it has achieved that goal, no more military or moral boundaries will be existent to capture the rest of what it regards as “Novorossiya” reaching up to the borders of the European Union.

14 thoughts on “The worst case – The pocket of Debaltseve closes, trapping thousands of Ukrainian troops”