8 hours before the agreed on ceasefire was thought to come in effect, not only the fighting on the ground escalates but Russian and “DNR / LC” representatives indicate, they will not feel bound to the deal anyways. This development once again proves western hopes for the Russian president Putin coming to his senses were unfounded and will be dissatisfied another time. Two hot spots of intense fighting along the line of contact in occupied Donetsk and Luhansk regions extract, with the de facto closed pocket of Debaltseve in the north and an area of some 120 km east of the coastal town Mariupol in the south.

In Debaltseve, all Ukrainian efforts to reopen the M03 between Artemivsk and Debaltseve failed since the de facto closure of the pocket 5 days ago (article), trapping an unknown number of Ukrainian troops which might be between 1500 and 5000 according to different reliable sources. Instead, Russian forces were able to widen their control over the strategically important villages of Lohvynove to the north east, controlling half the way to Luhans’ke which is the last point of Ukrainian safe control by now. Fresh Russian army special forces as well as thousands of mercenaries from all over Russian and some local anti-Ukrainian fighters flow in from Horlivka and the areas to the south east with the resupply / reinforcement line reaching directly to Rostov oblast in Russia. Coming via Vuhlehirsk and Kalynivka, they reinforce the frontline with a merely never ending volume of men and heavy weapons. Hence, all Ukrainian army attempts to reopen the M03 failed (with a lot of Ukrainian armor being destroyed) and the only – extremely dangerous and probably not usable at all – road leading into and out of Debaltseve extends some 2 km to the north of the M03 and through the village of Nyzhnje Lozove, reported to be still held by Ukrainian forces.

At the same time, troops loyal to the invasion command in Moscow, intensify their attacks on Debaltseve itself, approaching it mainly along the railway line leading to Zorynsk in the north east. They have come 3 km close to Debaltseve itself yesterday but probably further advanced overnight and stand at the Ukrainian fortifications in Novohryhorivka and the northern suburbs of the city itself by now. In Chornukhyne 3 km east of Debaltseve, Ukrainian and Russian troops fight fierce battles inside the town in what can be described as urban warfare. After the fall of the entire Ukrainian south eastern front in Mius, Ridkodub and Nikishyne, Russian forces could free more troops to take part in the assault coming from the south. The below map summarizes all important territorial and fighting-related developments around the pocket of Debaltseve, showing the desperate and probably only deteriorating situation for the Ukrainian army – in – and outside the besieged area. 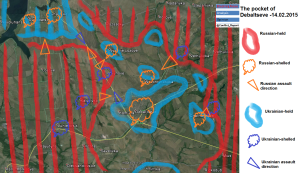 Over the next hours the situation is likely to further escalate with Russian commanders saying, the 14th of February (today) would be the decisive day for the battle. However, hopes that “Ukrainian troops only have to hold out until midnight” have to be given up as Russian commanders and their local puppets first said, every attempt to reopen the pocket would be regarded as a breach of the Minsk 2 agreement and met with lethal force and later made a mockery of the entire Minsk talks, saying the battle around Debaltseve was not part of the agreement reached (The “DNR’s president” Zakharchenko) and to end the fighting around the town tonight would be a “misinterpretation by western signers” (Russia’s Lavrov via Interfax). Looking at these statements and the developments on the ground, it becomes crystal clear that Putin never planned to give up conquering the city (now) and a lot of land of Ukraine later.

The second battlefield extends east of the southern city of Mariupol, where the Ukrainian National Guard Regiment Azov launched a surprise offensive several days ago, realizing the fact that most Russian invaders are active in other parts of the occupied territory. During their initial assault they managed to push weak Russian forces back around 12 km from Mariupol (article), taking a number of villages and towns along the two main roads leading to Novoazovsk and nearby Russia. However, reports of strong Russian army formations crossing the border from nearby Taganrog turned out to be true and the Russian counteroffensive took full pace this morning with virtually all cities along the front being shelled with heavy weapons leading to the death and (mostly) injury of dozens of Azov fighters as well as civilians along the line of contact. While the Ukrainian National Guard fighters yesterday stood close to the Russian stronghold of Sakhanka (another source tweet), they seemingly had to withdraw to Shyrokyne overnight where they arranged a line of defense under heavy bombardment, successfully taking out several Russian army tanks with light anti tank weapons namely ATGM. The below map gives an impression about the situation according to all reliable sources as it looked like around noon February 14. 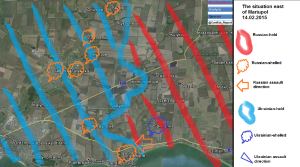 It can be excluded that Russia will accept the recent loss of 120 km² in this area. It wants to remain its eyes directly on Mariupol, the largest city remaining under Ukrainian control in occupied Donbas. To achieve that goal, it will not stop the offensive until it regains the line of contact which was in place until last Monday. Doing so and possibly facing heavy resistance from well-equipped Ukrainian forces, it remains to be seen if it will stop east of Mariupol or try to go further this time.

Looking at these developments over the last 24 hours and having in mind that Russian medium range rocket artillery repeatedly bombed cities like Kramatorsk and Artemivsk, far west to the current front, are we indeed facing “the storm before the silence”, meaning a ceasefire starting after all the current fighting in less than 8 hours?

Probably not. Russia isn’t finished with its territorial aspirations in neighboring Ukraine yet. It needs to control a much wider area to secure its strongholds in the east and push Ukrainian troops back from its “Republics’ capitals” of Donetsk and Luhansk (city). Furthermore a land bridge between occupied Crimea and the currently embattled territories of Ukraine is still needed to supply the southern Ukrainian peninsula with the goods it needs for a sustainable development. While this might not happen over the next weeks or months, latest statements (from 10 days before the ceasefire should start) by its puppets in Donetsk city have already set the course for the war to continue.

The “DNR’s president” / terrorist leader Zakharchenko made clear that if not the entire Ukrainian regions of Luhansk and Donetsk (of which Russia only controls 40% so far) became independent under their leadership, they would expand the war as long as necessary to reach that goal. Keeping that in mind the chance of a real truce starting tonight, not to talk of heavy weapons being withdrawn from next Tuesday, stands close to zero.

15 thoughts on “The storm before the silence? Russian forces escalate their offensives in eastern Ukraine”