The leaders of Ukraine, France, Germany and (logically!) Russia sat together for more than 12 hours on January 11 and 12 to discuss a ceasefire amid the ongoing Russian intervention in neighboring Ukraine. In the end, a “deal” was reached in which fighting should cease – not immediately – like Merkel, Hollande and Poroshenko had wished for but after a period of more than 60 hours, precisely at midnight on Saturday night / Sunday morning. This “limited continuation” was asked for by the – not participating “rebels” and formulated by president Putin as one condition for his signature.

Despite the fact that every sane person could see, this demanded prolongation of the active fighting was to create further bloodshed among the Ukrainian troops and to gain more territory – mainly around Debaltseve – until Sunday morning, it took only another 12 hours until Russian invasion forces showed what else they could “achieve” in these 66 hours, namely to create a pretext for the impossibility of the start of a ceasefire by blaming Ukraine for “massacres among the civilian population”, which demand a cotinuation of their offesnives to “save Donbas citizens from nazis”, the known Russian narrative / fake absurdity, out there since 10 months.

According to intelligence reports of the Militia, in order to disrupt the agreements reached in Minsk, the Ukrainian military plans a provocation with numerous victims among the civilian population at 20:00 [19:00 Kiev time] from the direction of Stanitsa Luhanska.

Statement in Russian (as it might disappear from the homepage)

Several Ukrainian-based pro-Russian VK social network sites repeated the warning during the next minutes in what seemed to be a twing of bad conscience amid the knowledge that civilians would be targeted and killed in just a short while.

1st: It is not known that Russian spies infiltrated Ukrainian units on the frontline.A warning 1 hour prior a Grad attack is thus very unlikely.

2nd: It simply makes no sense that the Ukrainian site would be interested in a continuation of hostilities as (apart from the far south) it is either holding the line or losing ground since two months, struggling to cope with a suprior Russian invasion force.

3rd: While the Ukrainian army is widely presumed to hit back at Russian artillery and MLRS positions, no matter their proximity to residential buildings, there is no proven case, it ever started a MLRS attack with such brutality and disperion on a predominantly civilian city quarter.

At exactly 19:00 local time (20:00 Moscow / “LC” time”), a massive Grad attack was launched on the eastern quarters of Luhansk, having a radius of more than 2 km. Analysts (among them a source of mine) counted 60 impacts within 20 seconds across the area, meaning “one and a half” full BM-21 Grad missile systems were emptied on civilians in the city of Luhansk. 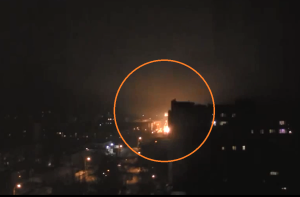 The missiles did not only hit residential buildings to the north east of the camera position (there are 2 more worse quality videos of the attack) but also in the middle of a main road and electrical infrastructure leading to a total blackout in the area. The wide impact area and sheer quantity of missiles used shows, this attack was merely conducted to terrorize civilians especially against the backgrop that there are no known military targets in that area (different from other parts of Luhansk city). Only the fact that the missile attack happened at night led to a relatively small casualty number among civilians with 4 killed and 7 injured according to preliminary reports.

The obligatory geolocation and analysis of the attack prove the Russian invasion command kept all its promises about the heinous attack. (Graphic!) footage of the direct aftermath of the attack made it possible.

Step one: Identifying an impact location. 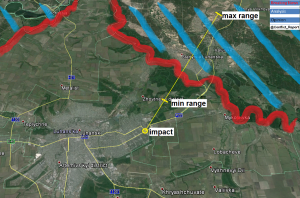 The analysis shows, not only the Russian forecast of the time but also of the direction of the attack was correct. The attack happened from direction of Stanitsa Luhanska and certainly within the possible 3 km “window of opportunity” inside occupied Zhovtnevyi district.

To complete the Russian cynicism on the attack and once again reflecting a minimum of regret by the local – NOT by the Russian – representatives of the occupation, they posted a statement one hour after the attack, virtuously shouting out:

In conclusion, this is another inhuman act by the Russian invasion command to incite the local population, blame the Ukrainian army for IT’S crimes and create another pretext to prolong the war, an approach, barely surpassable in its malice.