Eight days after the fall of Debaltseve (article), many analysts still believe, the worst in terms of fighting might be over in eastern Ukraine and Russia’s thirst for more territory appeased. Fighting activity continuously decreased during the last days along the border of occupied Donbas and yesterday was the first day of no Ukrainian fatalities since the signing of the Minsk 2 agreement on February 12. Still, this impression deceives.

The prediction, I stated in my last article, that large parts of the offensive Russian forces which were active in and around Debaltseve moved south after their victory there and will soon turn up in the greater Donetsk area as well as near the southern coastal city of Mariupol was meanwhile confirmed by multiple analysts, including several sources on the ground in southern Donetsk region. However, what seems not to have been realized by analysts and international media organizations yet is that the question, whether or not an attack towards Mariupol will take place or not has already been answered. It started the moment, Debaltseve fell to the invasion army.

In early February, Ukrainian national guard forces from Regiment Azov were not willing to obey the suicidal “defense only” strategy by the military and political leadership in Kiev and decided to go on the attack (article), amid a weak Russian / local separatists-held frontline east of the city (as most forces were active around Debaltseve). Within 2 days, they recaptured around 120 km² of Ukrainian land and established new fortified positions in a number of towns, some 10-15 east of Mariupol.The below (professional) map gives a good impression of what could be regained and put back under Urainian control during this offensive.

But the joy was only brief. 5 days later, on February 16, Russian forces started massive attacks on the front, pushing Azov troops out of Shyrokyne and to the town’s eastern outskirts (geolocated) in a first stage of their counterattack. Several days of relative calm followed, but on February 23, their offensive gained pace again, using all kind of weapons – of course – forbidden in the Minsk 2 agreement – and even Russian air force surveillance planes over the occupied territory. The below detailed map shows what was used where and what the initial situation in terms of territorial possession at that time was. 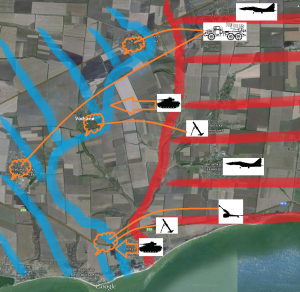 Due to the (anti!-)Ukrainian strategy of adhering to the Minsk 1+2 agreements, defending Azov troops could only fight back with small arms and mortars, by far not strong enough to resist the fresh Russian push, executed by forces coming from central Donbas via Telmanove as well as via Novoazovsk and thus directly from Russian army and invasion bases across the border (article). Reports from the Information Resistance group say up to 600 invasion forces stand ready to take part in the offensive as well as dozens of tanks and armored fighting vehicles, not to speak of heavy artillery and MLRS systems.

As a logic consequence of the uneven (allowance to use) force, Ukrainian troops initially had to withdraw from Kominternove and shortly after from Pavlopil and its tiny suburb Pyshchevyk, meaning a loss of some 70% of the territory, Regiment Azov liberated earlier this month. Not even today, as the Ukrainian ministry of internal affairs report the use of Russian army T-72 tanks to attack Regiment Azov positions near Shyrokyne, the Ukrainian army command would give its troops the needed artillery cover. The below map shows the situation as it appears according to all available reports on February 25. 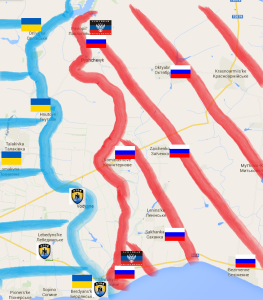 However, these – yes – major territorial advances by the Russian side (of some 80 km² returning under their control) are once again whitewashed by the Ukrainian leadership, and even pretended to never have happened. To achieve this, they simply changed the narrative. While NSDC spox Lysenko announced on February 10, that the Ukrainian forces, by the offensive east of Mariupol., were  “returning to the agreed on demarcation line in accordance with the Minsk agreement”, he / the leadership seems have changed their mind to keep face and not admit, their “hold the line” strategy once again leads to defeat. Suddenly, towns like Pavlopil and Kominternove (geolocation) turn “buffer zone” areas, where no side is meant to have a permanent presence. Thus, leaving the towns is no Ukainian withdrawal and – and here it becomes ridiculous – Russian forces “might go there, take some pictures and leave again”, but can not control these areas. However, the ATO’s sector M spokesperson Chaly does not say, why the Russian side should have any reason to leave the towns after they recaptured them. Instead, Regiment Azov reports that the settlements are used to stage artillery attacks against them, simply ignoring, they might be “buffer zone” areas …

Last but not least, many people keep asking if Russian forces will attack Mariupol itself and capture it in another step to build a land corridor to (also-)occupied Crimea. There should be doubt about that for the coming weeks at least. While some analysts believe, the Russian army and local separatists might directly attack or bypass and encircle the town, the cost for that move might be massive and possibly too high for both sides, especially taking into account that – different from Debaltseve – here both sides will have a steady streeam of resupplies and reinforcements until cutting the opponent’s supply lines with extreme force. Thus, the more likely scenario in the short term is that Russian forces will try to get back into the comfortable situation of controlling all smaller settlements east of Mariupol, being able to attack military and civilians targets in and around the town like it was the case between September last year and January 2015. Doing this, they would be able to inflict constant smaller casualties on the fixed Ukrainian line of defense, keeping the conflict boiling on a low but steady flame. At the same time, it would enable them to raise the stakes (attack Mariupol itself) whenever their supreme command in Moscow feels to do so, without having to move larger contingents of men and material (more than 5 kilometers).

Finally what we might see during the next weeks and probably months will rather be an offensive towards and not on Mariupol. However, this offensive is already happening as we speak, kept dead quiet by both, the Russian and the Ukrainian government, but painfully felt by mostly volunteer Ukrainian defenders on the ground as well as civilians, coming back under Russian rule or – like so many others – being forces to flee to Mariupol itself or other safer regions in Ukraine.