Shortly after the Minsk 1 ceasefire started, it became clear that Russian forces were in no mooed to respect the agreed on truce and started repositioning around the then Ukrainian-held airport of Donetsk, getting in favorable positions all around the new terminal, the only mention worthy position of the Ukrainian military then. After some weeks of relative calm they started an intense shelling campaign of the large building and in late December, they used the advantage which was given to them by the Ukrainian political and military command, assaulting the area from all relevant directions. Three weeks later, the strategically important airport fell to invasion forces (article) from neighboring Russia, a fact that should have been a chilling reminder for the government and military command in Kiev that signing a ceasefire with Russia and relying on it was a grave mistake which should not be repeated at any point in the future.

Far from that! Only 4 weeks later – on February 15 – another “ceasefire” came into effect against the backdrop of a dire military situation around the strategically crucial city of Debalteve with Russian troops claiming (and there are many arguments this was and is indeed the case) the city and thousands of Ukrainian troops in and around it were – and are – encircled and would have the choice to either surrender and withdraw or being obliterated over the next days. However, the Ukrainian political and army command seemed once again to have developed a very unique perception of reality on the ground, claiming – until today – troops are getting reinforced and resupplied and there is no need to reconsider the current – ceasefire – strategy to hold the city. This comes all the more ridiculous as the same army command recorded more than 200 Russian ceasefire violations and more than 40 killed and wounded own troops during the first 48 hours of the latest would-be-agreement.

At the same time, (pro-)Russian media, being embedded with its regular army forces, showed daily footage which – after being analyzed and geolocated – proved that Russian forces were advancing towards the city, into the city and finally took wide parts of it until today, claiming that most parts of it fell and Ukrainian units are either surrendering or withdrawing, only holding the western quarters by noon February 17.

To achieve this, the Russian army used the total absence of heavy Ukrainian artillery and MLRS cover for its troops in Debaltseve, breaching the defensive ring of the city from the north east (Zorynsk) in the night when the ceasefire started (shortly before midnight, February 14). Being inside the city on the morning of February 15, it then could follow its perverted logic of “observing the ceasefire while securing [its claimed city of] Debaltseve”. Nonetheless at this time, there might have been a tiny chance to see, the Russian “ceasefire” commitment was just another of Putin’s lies, attack the entire front and send a strong forces to Debaltseve to either retake the city and its surroundings or withdraw with weapons and leave it to the Russians. Instead the Ukrainian leadership decided – once again – to simply ignore what was happening on the ground and – even worse – counter its own soldiers begs for help, saying they were wrong and there would be no need to do so as the situation was “controlled”.

On February 16, these pleads for urgent help continued without Kiev accepting them or changing anything about its tactics. Instead the evening, the Ukrainian deputy Foreign Minister reasoned like totally out of touch with the reality, saying “everybody should stick to the agreed on ceasefire.” and that the “military is not returning their fire.” This morning (normally around 12 hours delayed) footage appeared once again, showing more territorial gains in Debaltseve, a heavy push from both sides along the main railway tracks with all sorts of Russian army high tech tanks, several Ukrainian POW and an abandoned Ukrainian base, which was seemingly left by soldiers without even taking their heavy armored vehicles with them. The below map shows a summary of the (geolocated and proven true) developments which actually happened on the ground (with a small degree of uncertainty) until the morning of today – February 17. 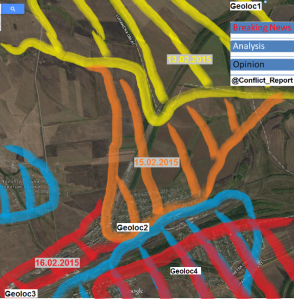 However the situation might have changed once again dramatically until the afternoon of today. Since the early morning, (unconfirmed!) Russian media reports claim that around 120 Ukrainian soldiers have surrendered in the city and the center was taken over by invasion forces from Ukraine’s eastern neighbor. While this is not confirmed yet, some Ukrainian journalists acknowledge parts of the version, reporting the central police department and train station were taken over by Russian forces from the Cuacasus region or that Ukrainian troops can hold out for a maximum of another 12 hours and face the threat of being killed if not reinforced after that.

At the same time, the Ukrainian geral staff told in a press conference at 1pm the following, leacing severe doubts, it was even able to see what was happening on the ground not alone act accordingly:

“The Ukrainian military control the village of Logvinovo, and also partially control the road to Debaltseve. There is fierce fighting on the outskirts of the city now, there is a tense situation in the area of the railway station, but our military are holding their positions,”

It took until 5pm in the early evening, when another communiqué was published, painting an entirely different picture of the situation:

“The situation as of right now is extremely difficult. A certain part of the city controlled by illegal armed groups. They assault groups, supported by armored vehicles and artillery attacked our positions. Continuing street battles. Armed Forces of Ukraine and other military formations to maneuver units and fire, and do everything possible to contain the aggression of terrorists “

However, it can be argued that this insight comes at least 3 days too late to react in any meaningful way to the Russian advances. Also there is no word on any planned reaction included in the statement, seemingly leaving it up to the winter-withered, outgunned and outnumbered remaining forces in the city to battle it out on their own. In conclusion, signing and relying on another ceasefire was a grave mistake. But it was an even it was an even larger mistake to not revoke the agreed on halt in fighting as soon as it turned out, the Russian side had again no interest in the signed truce and would only use it to its strategic advantage. By now, it seems to late to react and save hundreds or thousands of Ukrainian troops to get killed or turn prisoners of war by the Russian army. Blind trust in the least trustworthy political actor on this planet and a refusal to realize its again made mistake led to a situation, which will now lead to another “Ilovaisk” like in late August / early September 2014. The difference this time: Everybody responsible involved this time exactly knew, about the strength and intention of the enemy and ignored all that knowledge and experience nonetheless. Being fooled for a second time in only 6 months, the involved naive actors – also from central Europe – should know who they should be ashamed of.

Minutes after this article was published, the worst predictions turned out to be true. Russian troops parade more than 30 Ukrainian prisoners of war near Debaltseve, which – according to the Russian command – surrendered voluntarily and – according to the Ukrainian Defense Minister – were captured during a fight after a reinforcement convoy was ambushed and “smashed”. In any case, this is what I forecasted since weeks and also in the article above: No change in strategy by Ukraine and its western partners will lead to complete defeat against the Russian aggressor. 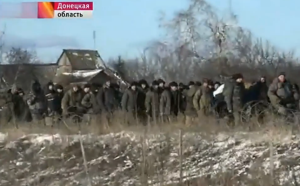